The Fashion Trend Of Chinese Clothing Throughout History

Chinese Clothing has changed a lot over the years. It has gone from the elegant Chinese dresses and ornate outfits worn throughout the centuries to the more modern approach of Chinese fashion you see today. The history of Chinese clothing is steeped in the imperialistic background of the country. The different methods of dress depended on a person’s station in life. Those who were common peasants would wear very drab clothing with little to no patterns on them. Those of royalty or simply with money could afford clothing with far more intricate designs. The materials also played a part in creating a separation between the social classes.

The biggest change to ever happen to Chinese clothing happened when imperial China was abolished in 1912. The citizens of China were finally allowed to wear what they wanted rather than having to wear the clothing according to their social classes in society. What they faced next was a political fashion change from the colorful Chinese dresses and outfits to the drab outfits worn by the entire society. This was because the communism took hold of the country, and colorful Chinese clothing was too much of an expression of individualism in society. Citizens were made to believe if they were wearing clothing which was unique they were bad citizens.

The modern Chinese clothing runs the gamut. It is acceptable to wear pretty much any clothing you want to. Many of the youth have taken to wear western style clothing rather than wear what has been embraced by many others looking to return to the clothing of the imperial rule. You can see the influence of even the most modern styles of western dress in the youth who attend rock concerts never before possible in China. What is unfortunate for the citizens is the high price they have to pay in order to have something which comes from America. 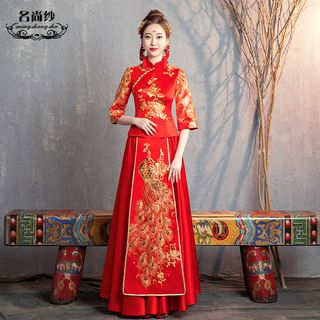 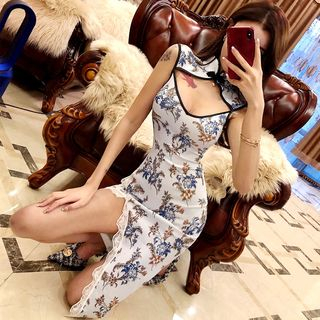 One type of Chinese clothing to make a return on the scene of Chinese fashion is the Qipao. Another name for Qipao is Cheongsam. This is basically a Chinese dress which has ornate patterns on it. It is more about the cut and style of the dress than it is about the patterns contained on the dress. Throughout China’s history, even women who have been peasants wore this Chinese cheongsam dresses. The dresses being made today are made to be much more provocative than the ones which were produced centuries ago. These are made to be skin tight dresses in order to show off the figure of the woman wearing it.

Chinese clothing for men has really embraced the western style rather than making any historical returns. This is because men will only subject themselves to the big baggy outfits which are tradition. These outfits are worn by those having traditional weddings or going through a religious rite of passage. The men do not have any affection for the old manner of dressing and are not looking to make any strides in the fashion world to return to it. Maybe one day there will be a return of the baggy pants and draping shirts from history, but not now.